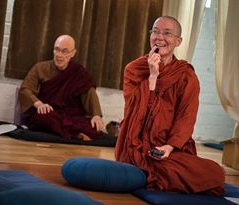 Buddhist Global Relief (BGR) is a non-profit organization, founded and led by Ven. Bhikkhu Bodhi. It's mission is to address chronic hunger and malnutrition.  BGR funds projects around the world that provide direct food aid, help develop better methods of sustainable food production and management, promote the education of the very poor, especially for girls and women, which helps stabilize population growth and eradicate poverty, and train women in right livelihood skills to support their families.

BGR's primary fund-raising efforts are the "Walks to Feed the Hungry." In 2011, we walked 18 miles from San Jose to Palo Alto for Buddhist Global Relief and raised more than $30,000. In 2012, we walked from San Jose to Mountain View and also in San Francisco, visiting 5 different Buddhist Temples and passing through China town, Japan town, and over Cathedral Hill, and in Escondido with some 50 monks and nuns attending the Western Buddhist Monastic Gathering.

In 2013, held Walks in San Francisco (October 19) and San Jose (October 6) and also in Sacramento (October 24), where the Western Buddhist Monastic Gathering was held.

For more details about the Walks in 2013 visit:

If you would like to participate in the organization of any of these walks or as a volunteer during the walks, please fill out the form below. 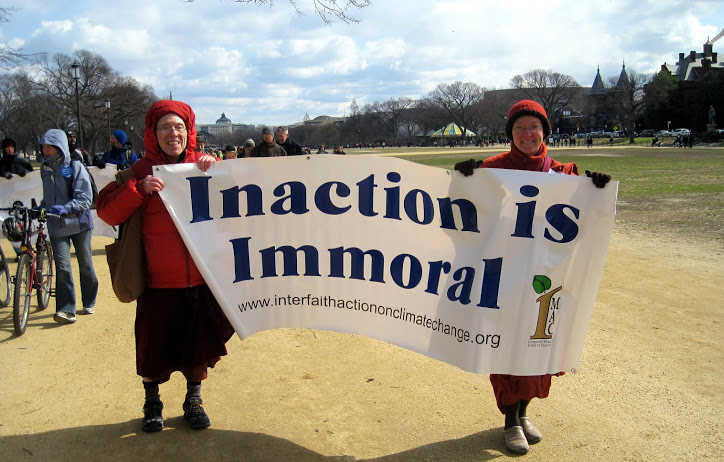 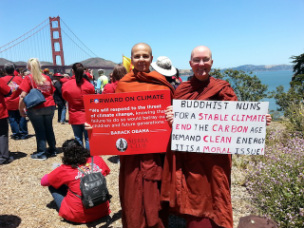 Whether walking across the Golden Gate bridge with Ayya Santacitta and hundreds of nurses or marching in D.C. with Ven. Bhikkhu Bodhi and thousands of environmentalists, activists and other ordinary people, we recognize the moral imperative of speaking out for action to end the carbon age. Out of compassion and support for the entire human population and all future generations of all species on this planet, we join this growing movement to promote divesting from fossil fuel industries, to remove subsidies to the fossil fuel industries, to put a tax on carbon and ramp up the development of clean energy alternatives. Taking action together is the only way to a viable future. Following through on what we know is right is the only way to true peace and happiness.

Eating Healthy for the Body and All Living Beings 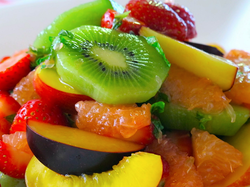 Fruits, vegetables, whole grains and beans provide the basis for a healthy diet and also a diet that is sustainable for the entire human population on the planet. With 870 million hungry people in the world, it is useful to reflect on how much we need, and if we need the sorts of foods that require a lot of land and water to produce.

Ayya Santussika has been a vegetarian for more than 30 years and leans towards a vegan diet. At Karuna Buddhist Vihara we hope to educate and support an all-around healthy lifestyle, including nutritious, natural foods (i.e. organic and non-GMO), considerate of all beings.

If you would like to host a showing and discussion of any of the following films, please fill out the form below.

Do the Math
Plan B: Mobilizing to Save Civilization from Journey to Planet Earth
The Economics of Happiness
Awakening the Dreamer Changing the Dream
Blessings: The Tsoknyi Nangchen Nuns of Tibet
Got the Facts on Milk?
The Return of Navajo Boy
Buddha's Lost Children
A Walk of Wisdom